When Jo Clare helped her parents David and Alison Newman move into Possum Bourne retirement village it never occurred to her that she might end up working there herself.

“I’d been through the sales process with them but I never thought of it as a job,” says the Pukekohe village’s new sales advisor.

Jo, her husband Warren and their three girls had moved back up to the Auckland area from Christchurch, 18 months after the earthquakes struck.

Ex-Diocesan pupil Jo was glad to be closer to her parents, but the couple had lost their car workshop/café business as a result of the quake damage and have had a hard slog starting all over again.

Jo had been commuting up to three hours a day travelling to her office manager job in East Tamaki from her home in Pukekohe.

“I was dropping Bailey off at 6.30am to get to work in time and what with all the swimming stuff it was getting too much,” she says.

When Jo says ‘swimming stuff’ she’s referring not only to her daughters who are competitive swimmers but also to her own activities as a national referee plus being club recorder and vice president of the Pukekohe Swimming Club.

With Ryman firmly on their radar, it was her husband Warren who spotted the ad and after a meeting with the Regional Sales Manager the deal was sealed – fittingly, at a swim meet!

In the short time that Jo has been working at Possum Bourne she has already reaped the rewards of helping retirees to make one of their biggest ever decisions.

“When the family is as happy as they can be knowing that their loved one is settled, secure and grateful, that is really rewarding for me.

“You see the relief on their faces. It’s about the safety and security of their loved one.”

Having been through the Christchurch earthquakes Jo understands more than most what it’s like to feel safe and secure, and now she is working for Ryman she has that feeling as an employee.

“I love how generous Ryman is with all the residents. And how it puts so much into its employees and is constantly looking forward.

“It hasn’t lost the personal feel despite the size of the company and the industry.

“We’re really lucky to work for a company like that.” 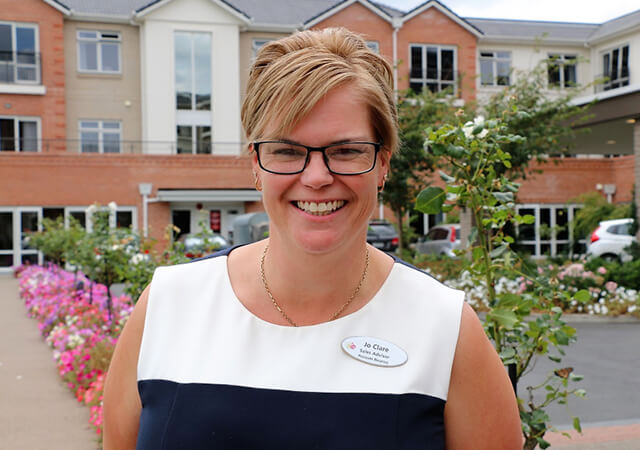 “I love how generous Ryman is with all the residents. And how it puts so much into its employees and is constantly looking forward. We’re really lucky to work for a company like that.”

Are you a warm and friendly, highly motivated, self-starter? Ryman Healthcare's successful sales team have an opportunity for you! Make a positive different in the lives of others Support from dedicated administration, marketing team and sales manager Opportunity to get involved in the local community ...

Show all jobs
1
This site is powered by Snaphire (www.snaphire.com)